So me and the girls used to love playing The Colors. Basically, you take votes to random questions such as, “Who’s most likely to become the President?”, etc. I was reading all my old emails between Jay and I yesterday and I came across this one e-mail back in May 2005 and it sure made me laugh. 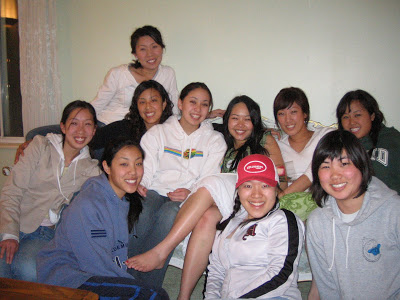 3) Most likely to go into a burning house to rescue people? JANIE: 3/5

5) Most likely to marry the funniest husband? JANIE: 3/5

22) Most likely to embarrass their kids the most? RACHEL: 4/5

28) Most likely to become famous: Rachel

29) Who will have secret crushes from their son’s friends: Sarah

31) Will wear lingerie for their husband the most: Sarah

32) Most passionate at their kid’s games: Rachel

I think this is so funny because no I didn’t get any votes on the ones I actually wanted to win such as most likely to be the prophet’s wife, or most likely to run into the burning building, or most likely to do charity work, but no, all the ones I’ve won were things like…most likely get crushes from my son’s friends? Wow, I’m so touched that this is really what my friends think of me? Haha.
I read some to Jay like the one “Who will marry the HOTTEST man(#17)?” In which I got the most votes and he said to me, “Wow, so this game really has some truth in it huh?” But then I told him how I won #26, most likely to marry the most cheesiest guy and he became silent. But I agree Jay, this game does have some truth in it huh? ^ ^ except I so don’t wear the pants in the relationship, Jay does FOR SURE. But I like it that way because he’s very wise and I respect and trust his opinions and outlook on things. But as we all know, if I really believed strongly in something and wanted something really bad, I would have it my way. 😉